With the arrival of the New Year comes the build-up to the Hollywood Academy Awards, or Oscars, as it is more commonly called. In luxurious pageantry, Hollywood’s elite arrive annually to walk the red carpet as they enter the ceremony to honor the best-of-the-best in the movie industry. The red carpet itself has been woven into the history and spectacle of the Oscars in Hollywood, but what is the story behind it?

To begin with, the allure and attraction of the red carpet have a lot to do with the color itself that shares a special connection with human beings. Red, along with blue and green, is one of the primary colors. Many hues of red are seen throughout nature in animals, plants, rocks, sand, and occasionally at sunrise or sunset.

Red also shares a long history with humans, being one of the first colors used by mankind in prehistoric art. It was the first color ancient civilizations learned to fabricate, reproduce and then manipulate into different shades. It was used in paintings and later in dye making. The Egyptians and Mayans used red on their faces for ceremonies, and Roman generals would cover their faces and or bodies with it when celebrating victories in battle.

It was in ancient Greece that the first known reference to a red carpet can be found in the Greek Tragedy Agamemnon by Aeschylus in 458 BCE. In it, the title character returns victorious from the Trojan War and is greeted by his wife, Clytemnestra. She welcomes him home by having a red carpet rolled out so that his feet will not touch the ground. He is hesitant to walk upon it as he knows that is an honor for the gods and in the end, it would become a symbol of betrayal and death, representing his blood and not his triumph.

The materials used to make red dyes in ancient civilizations like Egypt were costly to import, so the color had to be used in moderation. In Rome, the color took on added importance as the color used by the army and by the citizens in celebrations or ceremonies.

The premium prices and revered status of red carpets and clothing continued through the centuries. By the time of the Renaissance, these items came to symbolize the affluent (clergy, merchants, and rulers).

Red Oriental carpets began to appear in paintings. In these works of art, the carpets were used as backdrops and draped over furniture. During the Renaissance, extraordinary red outfits were worn by nobility and wealthy alike. Under their feet were carpets on stairs or on a dais. Red carpets had secured a reputation as a symbol of power and wealth in Europe.

Distance and time did not diminish this tradition as Europeans settled the “New World”. It is said that the community of Georgetown, South Carolina, rolled out a red carpet for President James Monroe as he arrived by riverboat in 1821. Thick crimson red carpets were used in 1902 by the New York Central Railroad as passengers boarded the 20th Century Limited. These instances are possible origins of the phrases “roll out the red carpet” and being given “the red carpet treatment.”

The red carpet made its way across the USA and one of the earliest known uses in connection to Hollywood was during the opening of Grauman’s Egyptian Theater in 1922. That year, the Egyptian Theater hosted the first Hollywood movie premiere (Robin Hood, starring Douglas Fairbanks). It was at this event that the red carpet, and what it symbolized, was passed on to the newly found royalty of Hollywood. 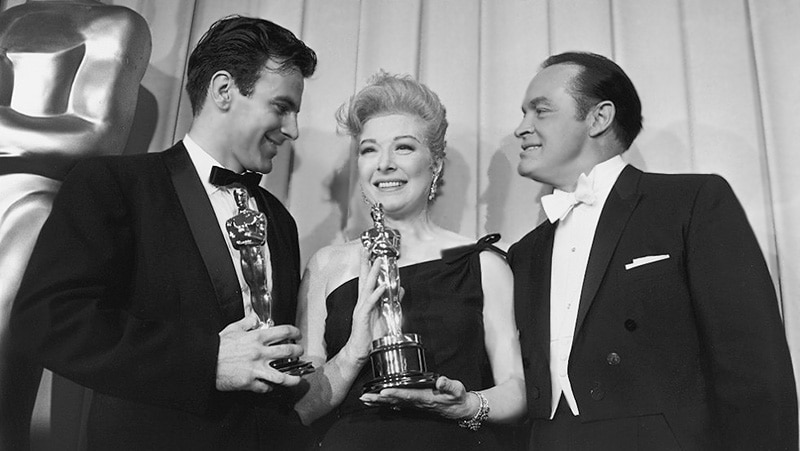 The red carpet would still have to wait for 39 years before it found its new home, though.

Even though the Oscars had been broadcast on television since 1953, it wasn’t until 1961 that the red carpet arrived at the academy award ceremony. On April 17th of that year, the red carpet made its Oscar debut at the Santa Monica Civic Auditorium. By the time Bob Hope hosted the 38th Academy Awards for the first time in color in 1966, the red carpet had become an integral part of circumstance and pomp surrounding the ceremony.

Since then, the red carpet has taken on a status equal to the Oscars. Especially since the arrival of guests has become a fashion show where a designer can show off her or his latest creations as they are modeled by Hollywood’s elite.

The red carpet has also been an inspiration for other entertainment award ceremonies. MTV features a blue carpet for their Video Music Awards and Nickelodeon makes use of an orange carpet for their Kids’ Choice Awards.

There may be other entertainment ceremonies that make use of a carpet, but the most famous and recognizable of the all will forever be the red carpet.

Inspired by this weekend Oscars, below are just seven of our most favorite antique and vintage red carpets:

This rug blog about the the Oscars red carpet was published by Nazmiyal Antique Rugs in New York City.